I have always called myself an immigrant. For some reason being an “immigrant” in my eyes had a lot more depth then being an “expat”. Moving to another country as an “expat” felt like a less temporary decision and therefore, a lighter one. Being an “immigrant” gave me the right to carry my suitcase full of sorrows but also provided me a hint of extra courage. By being an “immigrant” I could identify with those first arrivals, coming off boats after days of travelling, carrying all their belongings and looking for a better future. The fact that I arrived with a backpack and after a 24 hours plane journey had little impact on the romantic view I had of myself.

When I started my support group on Meet Up I thought about what term to use: expat or immigrant. I finally decided to use “expat” for a purely “commercial” reason: I wanted to target people who did carry their sorrows but … in a luxury case! Expats who, potentially, could pay for my services as a counsellor. Unlike immigrants who possibly were struggling to make ends meet.

I admit I felt uneasy about my choice of word. In a way I felt I betrayed what I believed and created a group for people I did not relate too, people I could not identify with. I spent some time pondering on this issue and I decided that “labels” were never a good thing. It was best to leave it and take it for what it was, a meaningless word. In fact I thought of bringing the subject up with the group and use it as a topic to discuss in the future.

Then today this article comes up on my Facebook page and it forces me to look at that uneasy feel again and reflect on the fact that sometimes “labels” carry a lot more meaning that we give them credit for. More food for thought.

A year ago we were getting ready to go home for Christmas and plans for lunch, dinner and other celebrations were well on their way. I spent hours discussing menus and logistic with my mum and my auntie Anna and I enjoyed the dynamics and little squabbles between the two of them. This is certainly one of the best aspects of living on the other side of the world, things that would be annoying if you were there all the time, become quite endearing!

My Auntie Anna is my dad younger sister and she was only 18 when I was born, the first baby in the family. I immediately became her little doll. We have always had a special bond, she lived very close to us and I spent a lot of time with her while I was growing up. When I was six my cousin was born and perhaps I was a little bit jealous of his intrusion, but she had a lot of love to give and she never made me feel like I was missing out. In fact I embraced my new role as the older cousin and, consequently, Luca and I are incredibly close.

My mum is an only child and my auntie became the sister she never had. Although incredibly different, they shared everything and helped and supported each others throughout the years.

We were due to fly on the 28th of November and I was excited.

On the morning of the 26th I woke up early and I felt uneasy. I am always nervous before a flight and I can’t help becoming extremely tragic minded! I looked at my phone and saw a message from my mum. I couldn’t read properly and I searched around for my glasses but I knew something was wrong. My mum does not send me messages at night, she has mastered the time difference beautifully! It only took a second to get my glasses but I had already started to shake and Nigel woke up to my sobs. My auntie had had a stroke and died.

Ever since I moved here I have been waiting for that call. In my dark moments I picture different scenarios and circumstances. What would I do? How would I feel? It was 6 am on the 26th of November and it was happening. I had lost one of the most important persons in my life and I was on the other side of the world.

It took me only a few minutes to accept that it was real and that I had to act quickly. I called home and someone, I only realise now that I don’t even know who I spoke to, told me that she went for her evening walk and died, looking at the sunset, without even noticing. She just kneeled down and she was gone. She was 67 years old.

I knew I had to be there for the funeral, to say goodbye, and my family knew it too. Although in Italy funerals are often held the day after the death, they promised me they would wait for me. I changed my flight and Sofia told me she had to come with me. I will always be grateful to her for being with me all the way. We flew in the evening and we arrived the morning of the funeral.

In all my conjectures I had never envisioned that there could be something positive coming out of the tragedy. Although I still feel her loss, what happened in the days that followed my auntie sudden departure has left me with a lot more then just grief.

It took only moments for Nigel to step into action and call the airlines to change our tickets, I felt confident he was in control and I did not need to worry about anything. The flight was easy and I cherished the time spent with Sofia. I am not sure why I was surprised that she chose to come with me, I’ve always known how much she loved her Zia Anna but at the time it felt like the biggest present she could give me. When we arrived my brother and my cousin’s son, Lorenzo, where waiting for us at the airport. I had never felt happier to be home, even though it was for such a sad occasion. We all felt the same, we were sharing the same pain and it made me feel lighter.

I had told Sofia about italian funerals, how, unlike in Australia, we go and see the person to say goodbye and it was probably going to be very heavy, dark, sad and emotional. I was quite worried myself. But as soon as I got to the hospital all my worries disappeared. It was sad and emotional but there was no heaviness or darkness. There were hugs and tears, kisses and smiles. The sun was shining and I felt like everyone one there was somehow part of our lives. And there was my beautiful zia Anna sleeping serene, surrounded by love, lots and lots of love. Sofia arrived soon after with Lorenzo and it looked like she belonged there. She was completely at ease, with death, with love, with family.

A year has past and I am about to fly home again. I will be there for a special anniversary, to spend some time with friends and family, to pick up Sofia and possibly to visit some museums and churches! Of course I am still worried about getting that call or that text but I am also confident that I am not alone and I will be there when I need to be there. 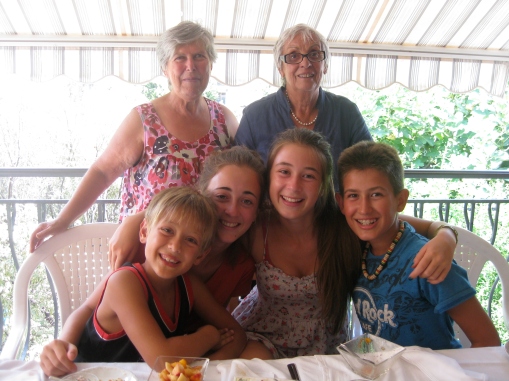 I want to be a blogger. I’ve wanted to be one the first time I heard about blogs. I love reading people’s stories and I love sharing my own stories. A blog is like sending emails to the world. It is just my kind of thing.

I walk around, living my life and constantly thinking of blog entries. I imagine putting little day-to-day experiences into written words and throwing them into the virtual ocean. A message in a bottle, someone somewhere might pick it up, sometime. I smile at the thought.

But I can’t do it. I have the block of the blog. In my mind it’s all very easy, as soon as I sit in front of the computer with the intention of writing my first blog entry, I freeze.

Why is that? How is it different from writing an email or telling a story to a friend? I will have to spend a bit of time analysing that, trying to come to the bottom of my block. And while I do this…I’ll write.

I like the thought of writing messages in a bottle. Perhaps no one will pick the bottle up and read my note. How does this make me feel? I write because I enjoy writing, I write for myself as in a diary but there is the extra attraction that someone might read what I write. And if no one does? The pleasure is in the writing and the sending it off. Yes, it feels right.

What about if someone picks it up and doesn’t like what I wrote? Rejection, judgement, criticism… it’s all a bit scary for me. Can I pick up the challenge and deal with these scary monsters? Can I feel the fear and do it anyway? I haven’t even read the book!

This time it takes me a bit longer to feel right with it. I want so much to have the ability to accept that not everyone one has to like what I write. But can I actually do it?

Could I use the blog as therapy? I am sure it has been done before.

Could I deal with my issues by writing and learning to accept rejection and judgement and what ever else will come up?

I could work on my blocks and on my blog, sounds like a win win situation.

The secret ingredient is LOVE

see the world through my expat lens

In Search of the Joybug

A helping hand to a happier, healthier You